HOME > THE MUCKLEBURY SUNSTONE > CHAPTER ONE

Chapter One - A Disappearance

In the searing heat of the Egyptian desert on the East bank of the Nile a young archaeologist, together with an old school friend, and a handful of local workers were digging their way into a long-forgotten tomb.

They had finally reached the burial chamber after weeks of back-breaking work.

There was no mummy and no treasure. It was completely empty.

But the archaeologist was not looking for, nor expecting to find, mummies or treasure.

He spent the following hours trying to decipher the mindboggling array of hieroglyphs etched into the surface of the limestone. He was looking for a clue that would prove they were in the right place.

Every nook and cranny of the walls surrounding them was examined for hidden doors or sealed entrances and all the while the young man pored over his tatty collection of notebooks.

They had almost run out of places to look, when his friend noticed a slight depression in the floor.

Brushing away the sand, they revealed the faint outline of a large square stone set into the floor. It looked like a trap door but not one that was designed to be easily lifted. When the tomb-builders had lowered it into place some 3500 years before, they had meant it to stay there.

The small band worked through the night. Using picks, shovels, sledgehammers, and sheer brute force they managed to knock a hole in one corner of the slab which revealed there was indeed another chamber below. But only when the other three corners had corresponding holes smashed into them, were they able to prise-up the stone and move it to one side. Beneath was a short flight of stone steps leading down into pitch blackness.

Torches were lit and, tentatively, they descended.

There were more hieroglyphs covering the stairway walls and the archaeologist became increasingly excited as they went. At the bottom of the steps, they could see the chamber was circular and, apart from the writings all over the walls, it appeared utterly empty.

A small part of the roof had collapsed and there was a thick layer of dust and stones under foot.

He knelt down onto the ground in the centre of the room and started brushing away the sand and the stones.

Occasionally he lowered his face to the floor to blow the fine grains away to the edges of the chamber. Something was showing itself underneath.

The last of the rubbish was cleared away and there, in the very centre of the chamber, was a perfectly circular stone set into the floor. It was clearly different from the surrounding rock and appeared to be made of a kind of white marble and was about six feet in diameter.

It was inscribed with markings. A smaller circle in the centre, around which were eight equal segments. Inside each segment was a finely etched hieroglyph. The inner circle was divided into two semi-circles by another line. Each one of these semi-circles had its own hieroglyph.

The young man picked up his leather satchel, made another note in one of his notebooks and stuffed them all back inside. He handed the bag to his friend with an instruction:

“If anything happens to me, give these to my sister, Adeline. She’ll know what to do.”

He took a deep breath and approached the stone circle, lingered briefly at its edge, then took a step onto the smooth surface and stood in the dead centre. In the dimness of the tomb the surface of the stone glinted as the crystals within reflected the flickering light of the lamps.

Then it began to glow.

The onlookers all took a step back as intense white light rose up from the stone. They watched, open-mouthed, as the whiteness ascended, gradually enveloping the man in its luminosity. The last thing they saw of the archaeologist was a smile spreading across his face, as the light reached his head and obscured him from view.

The light was so fiercely bright now that the workers had to shield their eyes. It completely surrounded the archaeologist in an upside-down cone of light which reached the ceiling of the chamber where it seemed to just disappear into the rock.

But the rock didn’t like it. Wisps of dust puffed out from small cracks that had begun to appear and which were spreading out like forked lightning across the ceiling.

The Egyptians fled back up the steps to the burial chamber. The friend was backing away too, fearful for his safety but unwilling to abandon his companion.

Just as he was on the point of following the workers in escaping, the light was snuffed out leaving nothing but the shining stone, slowly dimming in the darkness.

The archaeologist was gone.

Then all hell was let loose as the ceiling began to cave in. Small pieces at first, followed by larger segments crashing to the chamber floor, filling the air with dust. The friend managed to escape up into the burial chamber as the steps disintegrated behind him. He sprinted across the collapsing floor to the entrance shaft, raced up the long corridor and took the last flight of steps two or three at a time to get back outside, coughing and spluttering into the blinding desert sunlight.

Behind him the sound of crashing rocks and, finally, a muffled sound like thunder deep underground. Clouds of dust spewed out of the entrance and then all was silent.

Thirty-four years later, in the village-town of Mucklebury, a twelve-year old boy was making his way to school, unaware of his very personal link to those strange events in the desert.

Several strands of history were converging upon Everest Pearmain, and his life would never be the same again. 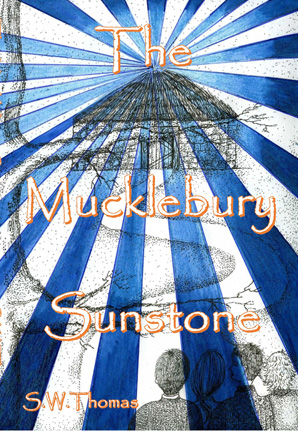