The Navy's Loss by S.W.Thomas

Laxton Pearmain was 22 years old, recently separated from the Navy and hungry for adventure.

He had always been hungry for adventure, which is why he had gone to sea in the first place.

What he hadn’t realised was that the people in charge of the Navy did not appreciate his particular type of hunger for adventure.

They liked to plan things out, weigh up the risks and the benefits of an expedition, have some kind of grip on health and safety, that sort of thing.

Laxton Pearmain, on the other hand, got an idea in his head and just went for it.

His superiors had been getting increasingly fed up with the not-so-able seaman's antics ever since the inauspicious day when he breezed into the recruiting office at Tumblemouth, nearly six years before. 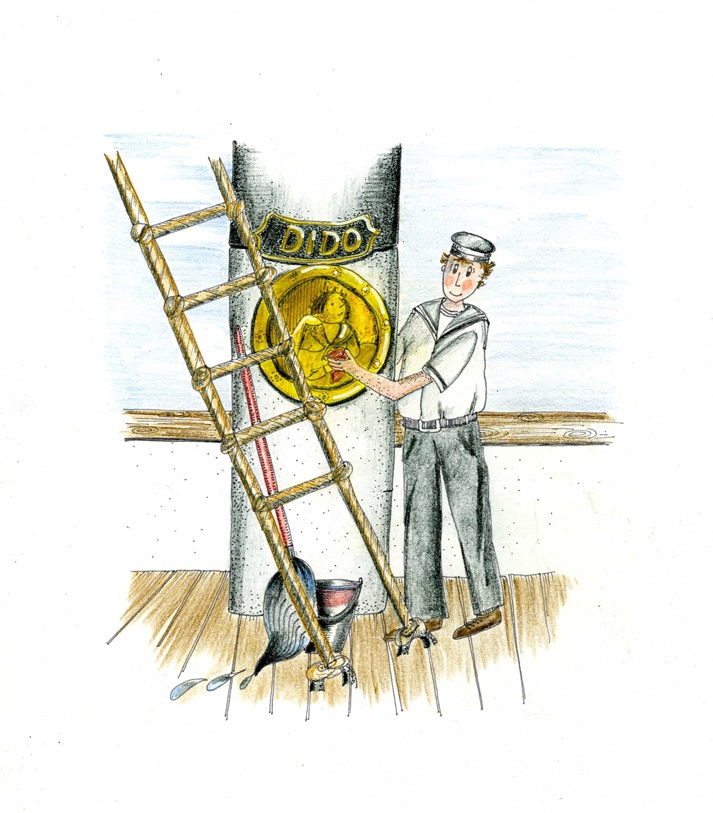 In an attempt to overcome this boredom, he decided to ‘borrow’ a rickety sailing boat, with grand, but vague, ideas of circumnavigation whirling around his head.

If he had been paying any attention during his basic training, he would have known all about tides and currents and eddies and rips.

If he had also been listening when his captain had briefed the crew about the place they were visiting, he would also have known that Vanatatamanuatu, in the local language, means 'island of the devil currents'.

After twenty-four hours the young sailor had not returned, and questions were being asked as to his whereabouts. His old school-friend, Chipford 'Chippy' Sawbones,  who he had persuaded to join up with him, was a slightly reluctant confidante and had often been press-ganged into far too many of Laxton’s crazy schemes for his own good.

In the interests of self-preservation, he had to come clean about what his wayward mate was up to this time.

Aboard his ship, The Dido, all hands were mobilised to get up steam and sail forth to hunt down the lost Laxton. The captain, who clearly had paid attention during his basic training, had a shrewd idea where the infamous devil currents might have taken the little boat and, after a few hours, it was located.

Unfortunately, during those few hours, the captain should have been the guest of honour at a ten-course feast hosted by Famalualua, the High Chief of the island. So if he wasn’t grouchy enough already, the sight of Laxton, asleep and oblivious, wrapped up in sail cloth in the bottom of the boat, made his blood positively boil.

Once back on dry land, he wasted no time in organising Laxton’s departure from the Navy and return to civilian life, forthwith.

No pay, no pension, not even a lift back home. 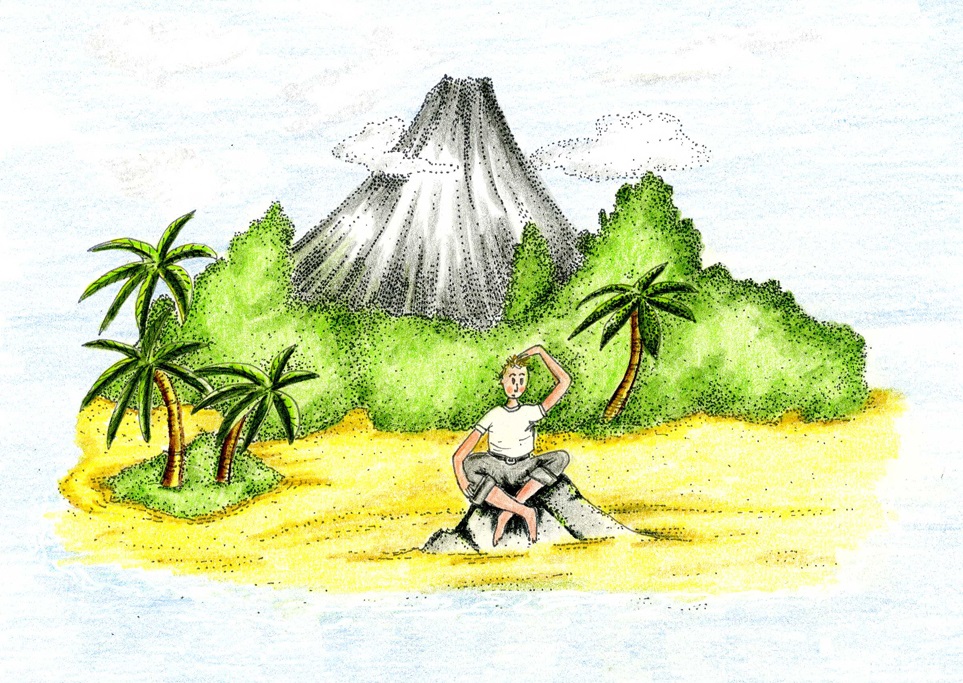 So this is where we find him - disconsolate and abandoned on a mostly rocky, volcanic island in the middle of nowhere.

The inhabitants were friendly enough, despite his boat-borrowing escapade, but resources on the island were scarce, so they were none too keen on babysitting a discarded sailor, whose usefulness wasn’t immediately apparent.

Laxton needed some money, or at least needed to do some work in exchange for money and food and shelter. If he could do that then he might be able to acquire another boat, legally this time, and sail away from the island into an unknown, uncertain and, above all, an unplanned future.

His last few years of Navy life had left him feeling somewhat restricted: physically, by life aboard small, cramped and smelly ships; and mentally, by the endless rules and regulations that he felt had been specifically designed to curb his free spirit and enthusiasm.

You will notice that his recent experience of little boats and unpredictable currents hadn't dampened his spirits or overwhelmed him with self-doubt. This was because Laxton Pearmain was ‘stubborn, bloody-minded and foolhardy’. Although, when those words were used by his commanding officer to sum up his character, he was rather flattered and translated them in his brain as meaning ‘indomitable, brave and adventurous’.

The way he looked at it, in typical glass-half-full fashion, was that his little voyage of discovery had taught him that it was not very difficult to escape the confines of the island with very little in the way of skill or knowledge.

Granted, the ambition to circumnavigate the island had not been achieved.

And he had to be rescued.

And he was fired from the Navy.

But they were just details, and Laxton Pearmain was not a details kind of chap.

Most of the islanders were employed in fishing or growing fruit, so he found work for a few weeks doing the jobs no one else wanted to do. 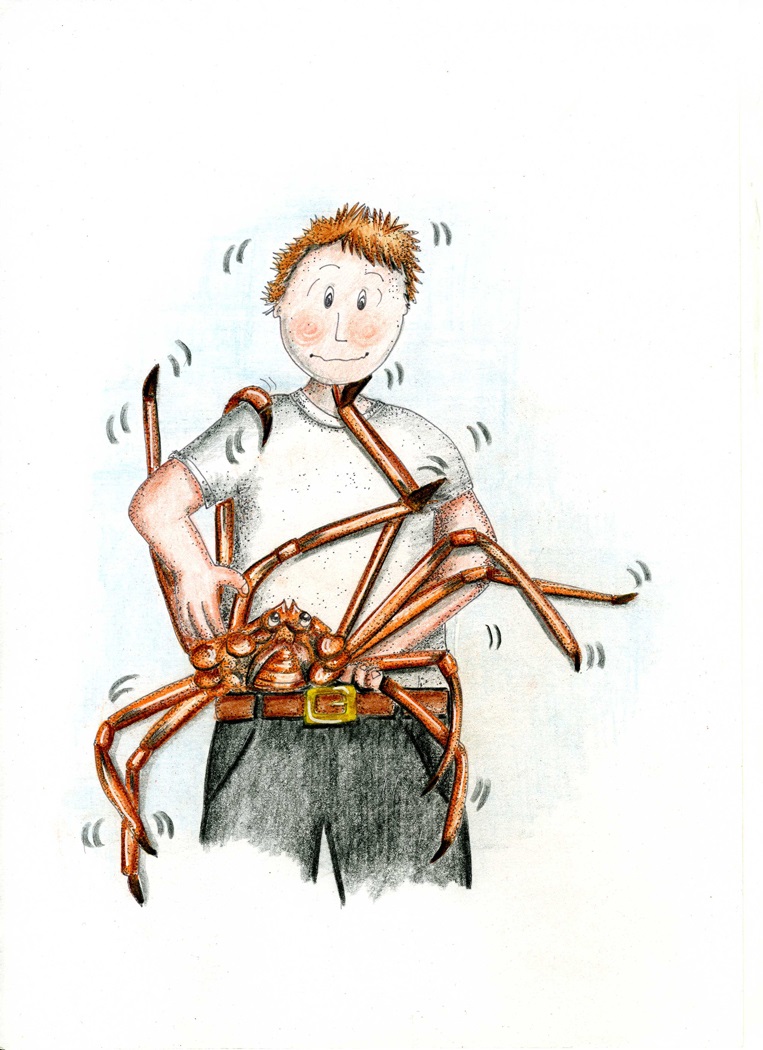 He knew a little bit about tending crops, having grown up on the family farm on the outskirts of the village-town of Mucklebury, so he was able to earn a few pennies and a bed for a few nights, clearing Jurassic-sized brambles with thorns thicker than his little finger, from a small field of various kinds of brightly coloured, exotic fruit.

When that job was finished he was overwhelmed with offers, as the islanders could see how hard he worked, especially in the noon-day sun when everyone else was resting in the shade somewhere.

So, he scraped barnacles from the bottoms of fishing boats; removed the guts from many and various types of weird and wonderful fish; and wrestled with enormous spider crabs to squeeze out the eggs, which were a local culinary delicacy.

Eventually he was able to purchase a battered collection of timbers, precariously held together in a loose approximation to the shape of a boat. To the outside observer there wasn’t much to be said in favour of ‘The Mucklebury Lady’, as Laxton had optimistically christened the thing. Each warped and worm-ridden plank was only vaguely associated with its neighbour and it lacked mast, sail, deck, oars and, crucially, the ability to float.

But it was a start.

With the help of his new friends, who had started to become quite attached to this odd little castaway who threw himself into all manner of horrible jobs with boundless gusto, he gradually repaired the holes and added what was necessary for flotation and locomotion on the high seas.

The day of his leaving finally came.

Just after noon, he set sail with a week’s worth of food and water and an assortment of tools and weapons, the latter more for hunting than protection, he hoped.

He was waved off from the little quay by a fair-sized crowd of interested onlookers, many shaking their heads in wonder, a few exchanging knowing looks and a little group making bets on how far he would get.

All were wondering just how long it would be before their bramble-clearer and barnacle-scraper was once more on dry land. 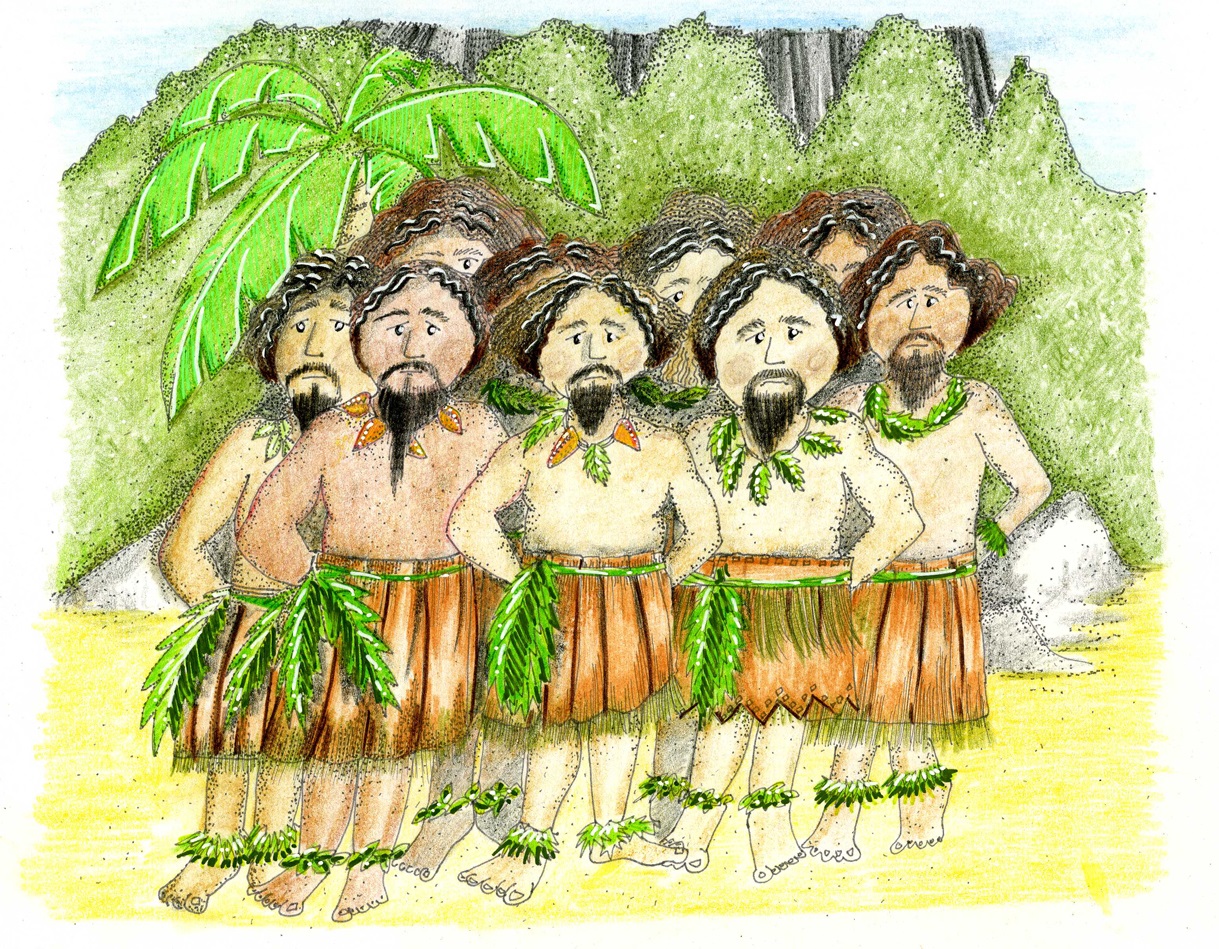 They didn’t have to wait long for an answer as, just after dusk the same day, 'The Mucklebury Lady' was washed ashore, a few hundred yards south of his starting place.

Laxton trudged back to the village, a little downhearted, and was welcomed with what seemed to him not quite enough surprise. Money was seen to exchange hands and some people looked happier than others to see him - presumably they had placed their bets on an early reappearance!

Refusing to be deterred by another maritime miscalculation, Laxton spent the night on the beach lying next to his boat, trying to work out what had gone wrong. As he stared up at a million stars, just about to drift off to sleep, he suddenly realised that the first time, when he was properly swept out to sea, he had left first thing in the morning in a westerly direction.

So, at first light, that’s what he did. And for the third, but interestingly, not for the last time time in his life, he sailed away from the little island of Vanatatamanuatu.

He was a little sad to be leaving the rock that he’d called home for the last few weeks, but his unscheduled sojourn had been a bit of an eye-opener to the budding adventurer. It had taught him that life could be free from rules and regulations, free from constraint and routine.

He could see a future living from day to day, never sure what the next dawn would bring.

Meandering from place to place with no particular plan, and no one to tell him what to do.

A life to be led with eyes and mind wide open to every opportunity for discovery, amusement and adventure.

A life less ordinary, along a path less travelled.

Find about what happens next in "A Rivalry Begins".